Social exclusion of marginalized populations is an intractable problem of global relevance. It occurs when individuals or groups cannot participate in typical activities of the societies in which they live. For some, that means having to go to a segregated school. For others it means not being able to get gainful employment, and for others still, it means not having access to quality healthcare. Minority groups in a number of diverse nations contend with social exclusion. This book develops a novel theory of how individual behaviors contribute to its persistence, and presents a possible solution. I introduce the "exclusion cycle," which consists of four parts. Anti-minority culture gives rise to discrimination by members of the majority. Members of the minority anticipate maltreatment and develop survival strategies. Members of the majority often disapprove of minority’s survival strategies and attribute them to the minority as such, and not the discrimination, and so commit an attribution error. Such errors feed the existing anti-minority culture and the cycle repeats. The book offers evidence that the cycle can be broken, showing that NGO-promoted dialogue and intergroup contact strategies can help reduce discrimination against marginalized populations.

Breaking the Exclusion Cycle grounds this theory in novel empirical work, including an original videogame that captures discrimination and survival strategies within a single, contained environment. While I develop the theory in the context of Muslim women in France, black Americans, and the Batwa in Uganda, the empirical portion is centered on the social exclusion of Roma (derogatively known as "Gypsies"). I provide original evidence I collected over twelve months of fieldwork to illustrate the theory and support my argument that the cycle can be broken. The centerpiece are two lab-in-field experiments that capture discriminatory behavior by non-Roma and survival strategies by Roma, which are supplemented by interviews, field observations, and surveys. While the empirics focus on the Roma, the theory as well as the implications of the findings apply to other cases of marginalized populations. 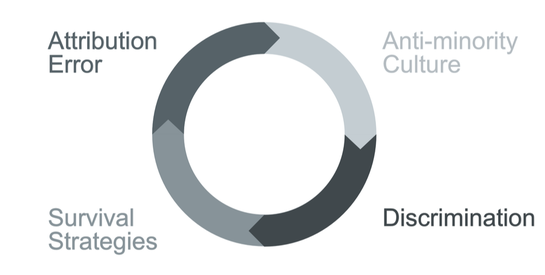